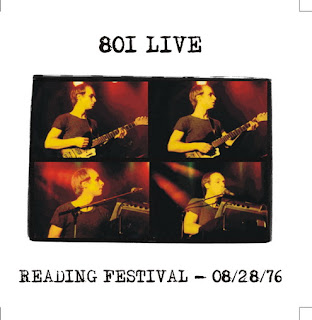 
This original 801 lineup only performed three times.
This is the complete 2nd performance.
The 1st was a warm-up gig in Norfolk of which no known recording has surfaced.
The 3rd was the officially released "801 Live" version
at Queen Elizabeth Hall on September 3, 1976.

Great stuff - really love your blog, always something superb to listen to! Thanks, Hal.

Re-up request: Any chance of a re-post of Gong's 1993 Gas Tape? Really bummed i missed out on that one.

Wow! Your blog is amazing. As "Anonymous" said, always something superb to listen to... and rare!
Thanks a lot for all your great work here, Hal.

Brilliant - thanks - but RS.com, Deposit and ZShare are all down already.

Many thanks - 801 Live is one of my favourite recordings. Can't wait to hear this one.
Blog on!
Shuggiemac

XLNT Posts!
A good mix of rare and unique sounds!
Please continue, and thanks!

I was dumbfounded to see there had been a recording of the Reading gig. I recall it fondly as they were in fine form, although I don't recall Eno playing!

I would like to ask if there is any chance of this being re-upped. It would be nice to shake up my remaining brain cells.

All the best and congrats on a great blog.

Howdy, any chance of you reviving the link? Would love to have a copy of this. Cheers.

Howdy, any chance of you reviving the link? Would love to have a copy of this. Cheers.