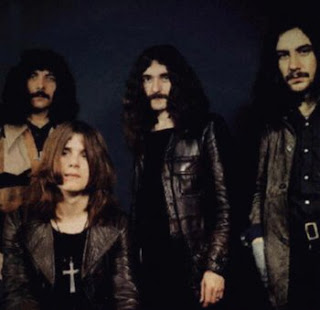 Sabbath played at Palasport in Bologna, Italy on February 19th, 1973. This was the 5th stop on their final European tour to support VOLUME 4. It was also the 1st of four shows in Italy, 3 of which were recorded. This was the first “known recorded” show for this leg of the tour.

Very good audience recording. This appears to be a complete show musically, but there are several cuts between songs. It sounds as if the taper was trying to conserve tape or edit out pauses between songs. The recording always seems to resume as the next song is being introduced. The quality is “good” at the very beginning, with the band sounding a bit more distant. There are also some minor defects (tape hiss, etc.) throughout, but the sound improves by the 2nd song when the taper moves fairly close to the PA. Ozzy, Bill and Tony are loud and clear, but Geezer is nearly inaudible. It’s really great to hear Bill so up front in the mix, as you can really sense the interplay between he and Iommi.

Sabbath turns in a respectably good show, but has to contend with various technical problems during the show. Ozzy’s microphone coaxes a bit of feedback from the PA at least a few times. The most major problem occurred during “War Pigs”, where it sounds like the PA system was actually cutting out. You could still hear the sound of the bands amplifiers in the distance, but Ozzy’s vocals are gone about halfway through the song. Bill and Tony make a brief attempt to bridge into an unplanned improvisation, but give up after a few minutes.

Regardless, the show continues with a fairly intense rendition of “Iron Man”. Bill takes the tempo up even faster than usual during Tony’s intro solo. You can tell that Iommi is working harder to keep up with Bill’s manic drum rolls. I know they had to have a good laugh after coming out of that exhilarating ending. This segues into “Cornucopia”, which is on the money. Ozzy isn’t quite that animated during this show, but his vocals sound good.

The show includes the earliest known rendition of “Killing Yourself To Live” with even different lyrics than what are heard on LIVE AT LAST (which was recorded a month later). What struck me about this song is how fully developed Tony’s guitar parts were even at this point. His guitar solos are nearly identical to what he would end up recording for the SABBATH BLOODY SABBATH album.

I was particularly amused by the reception that Tony Iommi got during his usual extended guitar solo section. On most nights, Tony shreds like a madman and the audiences usually reserve their biggest applause for the end. The Italian audience here was clapping and cheering after almost every section in his solo, which had to make Tony grin like a Cheshire cat! The enthusiasm of the Bologna audience really underlined the fact that this was a good show for the Sabs!