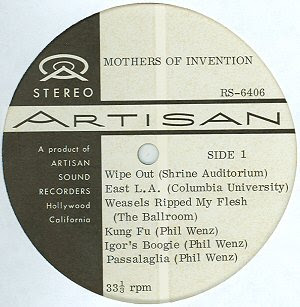 Acetate ripped by its owner RJ, whom we can’t thank enough for his generosity to share this gem!
Declicking by BengoFury, (one single pass with automatic “light reduction” (AA3.0), and approximately 12 hours of manual work – the “raw” waves aren’t a very pleasant listen)
Liner notes/deep studying (mainly) by progrockfan with valuable input from pbuzby, drdork, The Bastard Son, Zappa Penguin & flambay (sorry if I’m missing anyone!)

1. Wipe Out
Acetate label attribution: “Shrine Auditorium”
· Time – 3:04
· Official releases – Unreleased.
· Source – There is no record of FZ playing the Shrine Auditorium prior to 23 February 1974. An informed guess: 6-7 December 1968, The Shrine Exposition Hall, Los Angeles CA.
2. East L.A.
Acetate label attribution: “Columbia University”
· Time – 4:59
· Official releases – Unreleased extended edit. Redacted edits of this track were released as You Call That Music? on the YCDTOSA Sampler LP (the first 3:04 only of this track) and on YCDTOSA 4 (the first 4:07 only).
· Source – 14 February 1969, Columbia University.
3. Weasels Ripped My Flesh
Acetate label attribution: “The Ballroom”
· Time – 4:09
· Official releases – The first 2:58 of this track was performed at The Ballroom, Stratford CT (not Hartford as stated by FZ in his OM 2 Mystery Disc LP liner notes), and released as Skweezit Skweezit Skweezit on the OM 2 Mystery Disc LP and Mystery Disc CD. The next 1:09 was performed at Thee Image, Miami Beach FL., and released as the last 1:09 of Right There on YCDTOSA 5 (this segment begins with the final drum hit prior to the applause, and ends with FZ’s spoken “Thank you”). The last 0:02 is the end of the applause from the Miami performance; on YCDTOSA this applause is cut short with a cross-fade into Where Is Johnny Velvet? This edit of two disparate live performances explains why Bunk Gardner’s ‘Peggy tape’ does not appear in the acetate mix; in Stratford the tape was not played, and in Miami the tape, if played, had already finished. The complete YCDTOSA track Right There begins with a 0:31 segment of Miami live performance not heard on the acetate; a crossfade from live take into Criteria Studios material, which includes the ‘Peggy tape’, can be heard from 0:31 (the beginning of a studio segment of Estrada vocal) to 0:37 (the fadeout of the live horns); the Miami live tape resumes at 4:00 with a hard splice to the final drum hit before the audience applause; a consummate example of FZ’s razor-blade wizardry. This same edit can also be heard as Variations On A Theme From Run Home Slow on the cassette-sourced Columbia YSA 6477 Test Pressing.
· Source – First 2:58, 16 February 1969, The Ballroom, Stratford CT; last 1:11, 7 February 1969, Thee Image, Miami Beach FL.
4. Kung Fu
Acetate label attribution: “Phil Wenz”
· Time – 2:16
· Official releases – The first 1:45 was released as 5:05 to 6:50 of Didja Get Any Onya? on the extended Ryko Weasels Ripped My Flesh CD. The last 0:32 is unreleased. This track can also be heard, at a slower running speed, on The Columbia Test Pressing, and on Apocrypha, where it runs at the Columbia Test Pressing speed (thus revealing its original source) but omits FZ’s stage announcement. The Weasels LP and CD edits both end with a 0:01 instrumental flourish; this is clearly a post-production addition to the basic track, as it does not appear on this raw live take.
· Source – 2 March 1969, Philadelphia Arena.
5. Igor’s Boogie
Acetate label attribution: “Phil Wenz”
· Time – 1:28
· Official releases – An unreleased, unedited continuation from the last track. This track can also be heard as the first section of a much longer track of the same name on The Columbia Test Pressing, with a time of 1:32 due to slower running speed. The complete Columbia Test Pressing track continues with material from 25 October 1968, The Royal Festival Hall, London; this material is also heard on Ahead Of Their Time under the title King Kong (test pressing 1:32-1:51, CD 2:52-3:10). At 1:51 the test pressing omits a section heard on the CD (3:10-4:02). The next 2:51 is heard on both versions (test pressing 1:51-4:02, CD 4:02-6:49). The last 2:15 of the test pressing (4:42-6:57) is a unique, unreleased collage of studio and live material — though the ‘live’ material may well have been recorded live in the studio. Studio overdubs begin to dominate the mix beginning with the overdubbed ‘snorks’ from 5:03-5:10; from 5:40 to the end the track consists entirely of studio collage. This track alone makes The Columbia Test Pressing worth the price of admission.
· Source – An unedited continuation of 2 March 1969, Philadelphia Arena.
6. Passacaglia
Acetate label name: “Passalaglia”
Acetate label attribution: “Phil Wenz”
· Time – 3:11
· Official releases – Unreleased — but material from this track can be heard as the background to the FZ radio promo 1969 Hot Rats LP spot 2 ("Frank Zappa took a heavy trip recently ..."). This performance contains themes from King Kong.
· Source – Probably from the same concert as Tracks 4 and 5 — the venue acoustics are a dead match.

(Note also that the Side 1 label attributions for Tracks 1-3 all refer to concert venues; it is therefore logical to assume that the “Phil Wenz” notation for Tracks 4-6 is a secretarial mis-reading of a venue name — especially since the city for tracks 4-5 is definitely Phil[adelphia]. An additional sourcing clue for Track 6 is therefore found in the attribution, which basically has to be a mis-reading of the scrawled notation “Phil. [Ar]en[a]”.)

7. Copenhagen Night Music
This track was recorded in mono.
· Time – 3:00
· Official releases – Unreleased.
· Source – 3 October 1968, Tivoli Gardens, Copenhagen
8. Help, I’m A Rock
· Time – 3:46
· Official releases – This track was thoroughly re-constructed for Ahead Of Their Time in an alternate edit with added digital reverb, creating the illusion of an alternate take. The first 0:20 of the test pressing is unreleased. The next 1:20 is also heard under the same title on Ahead Of Their Time (0:00-1:20). There is an audible splice at 1:20 of the CD, shortly after the word “Mayor;” the next 0:11 is heard on the test pressing but not on the CD. The next 0:09 is heard on both versions. There is an audible splice on the test pressing at 5:27; the CD version concludes with a short section (1:29-1:38) not heard on the test pressing. The test pressing continues after the edit with a long section not heard on the CD. The next section is also heard as King Kong (7:29-7:55) on Ahead Of Their Time. A brief section of the test pressing is edited out of the CD at 7:55. The final section is heard on both versions. The sound quality of this dry test pressing mix is exceptional, probably surpassing the reverb-heavy mix heard on Ahead Of Their Time.
· Source – 25 October 1968, The Royal Albert Hall, London.
9. Chocolate Halvah
· Time – 3:33
· Official releases – The first 0:03 and the last 0:07 are unreleased; the bulk of the track was released on YCDTOSA 5.
· Source – 7 February 1969, Thee Image, Miami Beach FL.
10. Prelude To The Afternoon Of A Sexually Aroused Gas Mask
· Time – 3:35
· Official releases – Released on the original and Old Masters Weasels Ripped My Flesh LPs, without the extra material added to the extended Ryko CD. This test pressing version does include the studio-overdubbed ‘snorks’ heard on the Weasels LP (at 3:11) and CD (at 3:25).
· Source – 25 October 1968, The Royal Festival Hall, London


11. The Cookie Jar Lecture
· Time – 3:11
· Official releases – The test pressing features a unique redacted edit of Tiny Sick Tears on YCDTOSA 4, with three lines of lyrics edited out (0:08-0:20 of the CD) and a redacted ending, omitting the last 1:10 (3:20-4:30) of the CD edit. At the end we hear the same radio power switch and laughter that ends The Orange County Lumber Truck on Weasels Ripped My Flesh, which then segues, like Weasels, into the album-ending Weasels title track (here titled It Must Be Your Breath). The radio power switch sound is in fact the same as the sound on the original Weasels LP; digital reverb added to the CD and Old Masters LP causes reverb from the musical portion of Orange County Lumber Truck to overlap the radio switch, and thus alter its sound; the original LP mix is a better basis for comparison.
· Source – 13 February 1969, The Factory, The Bronx, New York City.

Wowee Zowee. Many thanks for this

Thank you very much!

Wow! The LP is real artifact for MOI fans. Beautiful!

ALL THE SHAREBEE LINKS ARE DEAD. CONGRATULATIONS SHAREBEE!
THANKS SO MUCH

I've been visiting this blog and I think you're doing an important contribution because the amount of information isn't bad enough and this'll be the nicest blog at my list.
2j3j