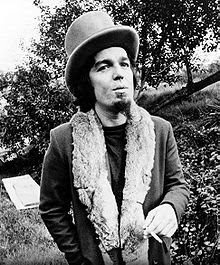 source: audience recording (mono) So here it is at last - Captain Beefheart's set from the last day of the Amougies festival. When I seeded the compilation of Frank Zappa's Amougies jams, I wrongly assumed the tracks featuring Zappa had all be officially released. In fact that wasn't the case. The only tracks available commercially are tracks 2 and 3, but track 6, which also features Zappa, was left off my compilation. So here it is, available for the first time ever I believe.

I've added below a few quotes from band members borrowed from the internet, to get a clearer idea of what the atmosphere was like at the festival, and for this concert in particular... I'm sure fans will enjoy the opportunity of hearing the "Captain Bullshit" incident for real.
Lastly, the usual reminder about the sound quality - the tape recorder used was way below modern standards and the sound is nowhere near "professional" quality. This reservation aside, however, this is simply an unbelievable document of a legendary festival, and so our hearfelt thanks to the taper, JJB, for recording this at the time, and for allowing me to seed it here. Bill Harkleroad: All I can remember is playing in front of thousands of people huddled together in sleeping bags at three in the morning in this huge circus tent. It's 27 degrees out, and there's frost on my strings! It was Don, Victor, Mark, me and Jeff Burchell on drums. Frank was sitting in with us, because he was supposed to be the festival MC - a difficult job when he spoke no French and most of the audience spoke no English. Having Frank play with us made me a little more nervous than normal. I think we played 5 tunes - the five tunes Jeff knew and that was it. Pretty weird flying us all the way over there and playing one gig!
Don Van Vliet: We had a good time. I don't know, what they were doing; they were throwing what looked like birds nests at us, and then one fellow out of the audience - between one of the compositions - said my name was Captain Bullshit, and I said: "well, that's all right baby, you're sitting in it." You know what I mean? I don't know if he was an American; I'm not sure, because he was using early Gary Cooper movie talk. Like "yep", things like that. I think they did well in five days and moving it from France to Belgium. But it was awfully cold... the people in the audience, I don't know how they did it. I think it was probably pretty nice for them to leave their bodies... but the amplifiers were blown out by the time we got to them, and we need clarity for that, and there wasn't any. I don't know. I hope they enjoyed it. I enjoyed it.
FZ: It was really miserable - a few tents and the people began to turn up from nowhere and they turned on the PA and that worked and they turned on the lights and they worked, and the groups actually began to play and by God they had a pop festival. And then they looked at it and realised that they had to keep on for five days. I was asked to join the festiva1. They first of all asked for the Mothers to play but there weren't any Mothers of that time, so Pierre Latt's who I had known for some time, asked me to co-host the festival, but when I arrived there I found that most of the people spoke French and they wouldn't know what the fuck I was talking about so it was useless for me to introduce the groups. So Pierre suggested that I might play with some of the groups. But I was at a great disadvantage because I didn't have my own guitar...

Thank you for this unexpected treat!

Thank you for this wonderful session.

An early version of Gong perfromed at the Amougies Festival too..
From Calyx http://calyx.club.fr/gong/index.html
[Amougies is a tiny Belgian village where a four-day festival of rock, folk, jazz and contemporary music was set up by BYG Records, between 24-28 October 1969. Intended as the first post-1968 large-scale alternative music festival in central Paris, the mayor of Paris, under pressure from the police, withdrew permission at the last moment, forcing the boss of Byg, Jean Karakos, to transfer his entire operation into a large field just over the border from France at the eleventh hour. Despite this setback, the festival drew considerably more publicity than it might otherwise have had and was a considerable success for Karakos, enabling him to finance his BYG label]

My god what a post this is!!! This is music history at it's best. When those two colossus of modern music met something unique happened in this loved art. This is more than joy. This is devastating.

Very cool, so glad I found this! Please check out my Zappa blog and my entry on Amougies here: http://frankzappasrevenge.blogspot.com/2009/02/amougies-belgium-1969.html Hope you come by and visit!