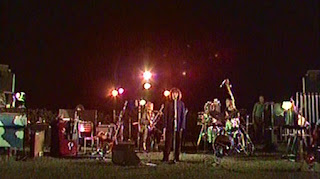 These concerts all come from the archive of Randy Jones. A long time trader/taper who went by the name Avantprog on this forum, and Malesch on some others. Randy was a good friend, and a true Texas gentleman( despite living in the Northeast for the last decade). Randy and I made regular road trips for concerts, including our annual pilgrimages to Quebec for the Victo fest, to Progday, Nearfest, and many others. Randy passed away on December 26 2009 after a 9 month battle with liver cancer, leaving a wife and two daughters. It was their wish that I have these recordings, with an eye towards saying thank you to the community of music lovers that Randy held dear.

This concert, as legend jas it, was recorded by Jack Balchin, Henry Cow's engineer. Randy's discs were mastered at a very low level. I normalized and balanced the channels and sent the whole shebang through the Waves L3 plug-in to bring the levels up

Three tracks from this show were released on the Henry Cow Box, so are not included here.

A thousand thanks for this important find.

I Also knew Randy when he resided in Boston. I lost contact with him sometime in 2005. We did quite a bit of local avantprog show seeing and trading as well. I am quite shocked to here of his passing. He was always full of Life & Laughter.
He will be greatly missed. Thanks for keeping his Memomory alive through the music he loved so much.

Man, you are the bomb! Thanks so much for this share!