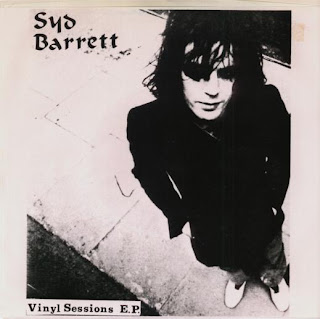 Overdubbing by anonymous fan
May 2009

Here is my attempt at making the 1974 Syd Barrett session more complete with sequencing the tracks and
overdubbing. I ended up with two tracks that are both comprised of multiple tracks from the Syd reels;
"Syd's Boogie" made up from the boogie takes and "john Lee Hooker" and "IF You Go" made up from
one of the takes of that song and "Ballad". Working on this music proved quite challenging due to
Syd's timing issues and the fact that there was really not alot to work with. That said, I attempted
to create backing for the mostly guitar demos and occasionaly played some lead guitar in as style as
close to Syd's as I could muster. It was also mixed with Syd's parts as the center point 99 percent of the
time. The title "Syd's Boogie" is unoficial and is a refrence to "Nick's Boogie" and the pieces that
make this track up, almost all of which are called "Boogie". "If You Go" seems to be an official title.

Overdubbed on 4-Track Cassette recorder on high speed to make overdubs analog and conducive
to the original tracks.

I hope that the listener enjoys this recording and does not feel like this is one of those "fakes".
It is still Syd but he is now posthumously recording with a stranger.

Post Script:
I did not use every piece that Syd Barrett recorded at Abbey Road Studio August 12, 1974. There are pices
that were left out due to two factors: redundancy, and the excluded pieces had issues with rhythm that were
fatal to making it sound listenable and the excluded parts were also usually out of tune more than the
rest of the session.Also note that Syd seems to have recorded a few bass tracks most notably on
"If You Go". That bass track was high in the mix and pretty.. um... loose.

Could you please repost part two on Deposit Files? Part one is good but two is apparently dead. Thanks!