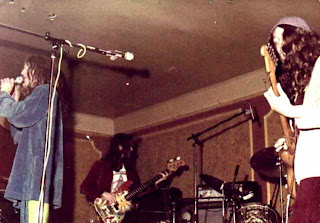 This is one of the few early Gong non-Gas recordings in circulation.
It's a short recording from a french radio broadcast called "Pop Club".
According to chronology on Calyx, Laurie Allan's first stint with Gong took place from December 1971 to April 1972.

Really outstanding are the two Flying Teapot era related tracks. Hope for more from same period to surface. Thanks very much for sharing these!

When I was in my teens I used to take my radio to bed with me and Mon- Fri tune into Pop Club on Radio Allouis broadcasting on Long Wave. I still remember the night I heard this Gong broadcast and thinking wow what a band. The next day I dug out an article that had been in the British Music Press (Melody Maker ?) a few months before and read about their album Camembert Electrique, only available on import. That weekend I ordered it from my local record shop and have been a Gong fan ever since.

This is the show I shared as torrent on Dime...glad to see you kept it in its original flac format.
Later I made a reseed with correct date (I didn't have that precise info when I first uploaded the show).

Hahahahah! This is my photo. I found it in Camden Town years ago.

Short recording yes it is, but the music and the talent can be appreciated, thanks for this piece of gold.

I used to listen to Pop Club around 1970. They had some really interesting avant garde music to open the show.
I tried phoning FRANCE II in the 80's to find out what it was but no-one knew. Then I just hit the motherload of a site - yours!!
If you can tell me you will have ended 41 year old puzzle.
Let me say that Canterbury(home of the softs)should be made the capital of the UK in my honest opinion.
please mail me on costingsolutions@yahoo.com if you get an answer. Thanks
Robin

Hello Hal, is there any possibility to upload this show again?
Regards from Brazil