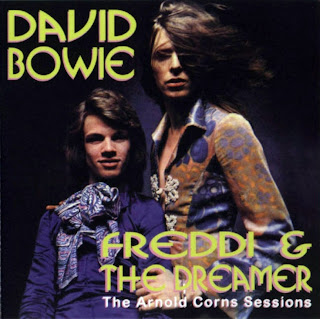 David Bowie-Freddi And The Dreamer
The Arnold Corn Sessions


A very nice disc with songs recorded during the short Arnold Corns era in 1971. The things that are "new" on this CD are three new versions of LOOKING FOR A FRIEND, one of MOONAGE DAYDREAM and one of HANG ON TO YOURSELF (with Gene Vincent!). The rest of the songs have been released on other discs. The sound quality is excellent, except for the Gene Vincent track. That track is only good! Some funny liner notes, and some really good information about the Arnold Corns project! A true must!

any chance of a re-upload?