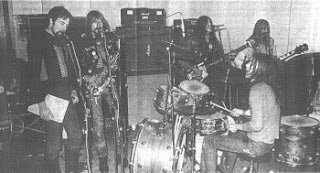 One of the best-sounding Hawkwind recordings from 1973 (which isn't saying much!). It's also notable for the "festival" atmosphere, with recitations from Michael Moorcock & Robert Calvert, and a great 14-minute instrumental jam. The only sad thing is that it's clearly incomplete, since it cuts off in the middle of The Watcher (and they would have certainly played Master of the Universe next, perhaps after another poem).

Unfortunately, the transfer is somewhat flawed, with some odd (infrequent) level changes and some clipping (although not severely), but is still very listenable. There are a few short gaps at the start/end of some tracks (perhaps the taper turned the recorder off), but little music seems to be missing. Orgone Accumulator is clearly spliced in from an inferior source, but the (relatively) high sound quality is maintained for the remaining tracks. Most of the track indices were way off, so it was extracted as a single wav, then split with a new cue sheet.

Hi Hal And Fisrts Of All Thanks For Your Posts,Most Of Them Are Great.
Now,Just Wish If You Could Change Filehosts Cause Wupload Needs 45 Minutes Waiting From 1 Download To Another,Depositefiles Needs Nearly 30 Minutes In Between,Uploadking Links Are Down Already.
Why Don t You Try ifile.it,Mediafire,Filefactory,Rapidshare ?
There s No In Between Waiting Time,There s Great Speeds,Just The Best For Free Users I Guess.
Cheers.

nice idea. thanks for sharing...

Mdiafire is good for DL when you don't have a paid account. It allows only one DL simultaneusly, but you you can start the 2nd DL right after the 1st is finished. But as far as I know it is limited to 200 MB per file, so you have to split the shows.