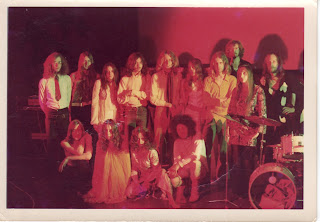 *Please help identify any songs if you can.

PRINCIPAL EDWARDS MAGIC THEATRE was a 14-member communal performance art collective in the United Kingdom made up of musicians, poets, dancers, and sound and lighting technicians.
The collective was originally formed at the University of Exeter in the late 1960s, and then was later based at farmhouse in Kettering, Northamptonshire.
The group was signed to John Peel's Dandelion Records and their single, "The Ballad of a Big Girl Now", was released in 1969.
Following the single was the release (under the same label) of two albums - Soundtrack and The Asmoto Running Band - the second of which was produced by Nick Mason of Pink Floyd.
The sometimes whimsical, sometimes epic (verging on progressive rock) writing style of guitarist ROOT CARTWRIGHT, was paired with the eclectic lyrical contributions of DAVID JONES, GILLIAN HADLEY and MONICA NETTLES, and was performed by vocalist VIVIENNE McAULIFFE.
The violin and recorders of BINDY BOURQUIN were another key element of the group's trademark sound. LYN EDWARDS, originally on bongos, took over on the drumkit.
Later, with a smaller nucleus (including new bassist RICHARD JONES from CLIMAX BLUES BAND) and a name-change to, simply, PRINCIPAL EDWARDS, they recorded a few new singles and a third album called Round One for Deram Records.
Most of the Deram recordings were also produced by NICK MASON.~ wikipedi

CURTISS MALDOON(DAVE CURTISS & CLIVE MALDOON)is a singer-songwriter duo from England.
They first began working together in the band BODAST in 1968 which also featured STEVE HOWE on guitar and BOBBY WOODMAN CLARKE on drums.
They recorded one album produced by KEITH WEST who was in U.K. psych band TOMORROW.
But it remained unreleased until it came out in truncated and remixed form in 1982 as 'The Lost Bodast Tapes'.
A full re-issue featuring the original 1969 mixes came out under the title 'Spectral Nether Street' on the RPM label in the 1990s.
Although not very active on the live circuit as they preferred to spend their time writing and rehearsing.
BODAST played a legendary show called the Pop Prom in 1968 where they were on the bill with THE WHO and acted as CHUCK BERRY's back-up band for the night.
CURTISS MALDOON were on Purple Records, the label started by DEEP PURPLE.
Their connection to DEEP PURPLE came out of DAVE CURTISS short-lived involvement with an early incarnation of the band known as ROUNDABOUT.
CURTISS was the vocalist and BOBBY WOODMAN CLARKE was the drummer.
No recordings have come to light of this line-up.~ wikipedi


*"Now the sets DO get imcomplete.
I only had 5 cassettes with me and I REALLY wanted to be sure to get as much of Osibisa as possible.
So for these three bands I started to conserve tape. NONE of these sets are complete.
In hindsight I might as well have taped their sets in their entirety as Osibisa never came on when they were supposed to and we left before they ever hit the stage :-(
It should be noted that I have never listened to this tape of these three bands barring a few seconds here and there to check that they all recorded properly.
So right now I am going on memories that are 40 years old.

At the time I was completely unfamiliar with LINDA LEWIS.
This would change over the next year or two when she seemed to be the opening act of every third band I went to see live it seemed.
And at the time (this is when she was still doing what she does here and not the more commercial stuff she did later) it would always be here and her guitar.
Playing what to my ears sounded like the exact same set each time.
So Linda Lewis... my mother and her girlfriend liked her. I did not.
I only taped a small portion of her set (she played for about 30 to 40 minutes total (all three of these bands played for similar lengths.
There was some reason why Osibisa's set kept getting delayed so these acts appeared to be coming on one after the other for whatever that reason was.
The upside was: the shortest breaks between bands of the entire evening!).
The audience seemed to like her well enough.
Put a black man or woman with an acoustic guitar in front of a 70's German audience and they will morew likely than not treat them with respect.
No whistling choirs or slow hand clapping.
It's one of them wacky German traits I noticed at concerts over the years ;-).
The only thing I remember about her was her huge afro.
Which even from the back part of the hall where we were looked huge.
It put the whole '80's concepts of "big hair" to shame.

PRINCIPAL EDWARDS MAGIC THEATRE... I had heard them on a sampler or three and liked what I had heard somewhat.
I may or may not had heard their first album at this point (It would have been within weeks either way of this show that I heard it).
I was kind of looking forward to seeing them as once again: in a few reviews I had read in NME and Melody Maker they sounded like a live band with potential to be a good live band.
For me the main problem was that the P.A. - It was just really hard to aurally and visually figure out what was going on.
At least from where we were sitting.
There was some "theatrical" stuff going on (coulda been dwarves dancing around the mini Stonehenge in the Spinal Tap movie for all I know - THIS particular set is what that scene has always reminded me of btw).
As three bands had to fit on one side of a C-90 to leave that second side for Osibisa (damn them!) you only get a taste.

CURTISS MALDOON... I knew nothing at all about them barring that they were one of the bands on Deep Purple's Purple Records label (which is probably why they were on this bill) and that therefore I was inclined to pay attention to them.
They were not bad at all.
Of the three bands here who's sets I had to cut to conserve tape this is the one band I wish I would have brought an extra cassette for, so as to not have had to cut their set.
Sure they were kind of similar to most hippie songwriter bands of the era but they were pretty good and stood a little bit above the rest.
Or maybe their hippie hats were a little higher than the rest, making them appear taller. Who knows?

And after Curtiss Maldoon we waited another 15 or so minutes to see if Osibisa would finally take the stage and then it was decided what with the icy roads (and an almost 1 hour drive back to Wuppertal over small and mostly unlit country roads and small towns in optimal weather conditions).
we walked back to the car at around 2am on a bitter cold Sunday morning."~ durian1

Thanks for this. I was curious about this when I noticed it over on Dime a few months ago, so I'm glad to find a chance to check this out at no expense to my ratio there.

Please would you be kind enough to reupload this?