Bonzo Dog Band - Do Not Adjust Your Set (FLAC) 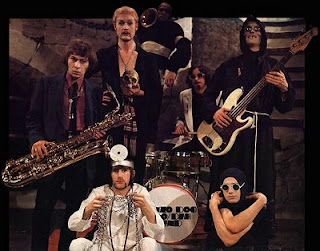 Do Not Adjust Your Set (DNAYS) was a British children's television series produced by Rediffusion from December 1967 to May 1969 in which the Bonzo Dog (Doo Dah) Band performed one or more songs what gained them a big cult following in the UK.

This audio collection from these shows is compiled from several sources. The bulk of the songs here are a straight rip from the 2005 DVD release (a MUST for every Bonzo's/Monty Python fan!!) which contains nine of the surviving programmes. Other tracks are sourced from the very rare Seventies vinyl bootleg album 'Loose Caboose' and a few are from that other essential Bonzo's release the double DVD-set 'Talking Pictures'. The overall quality is very good to excellent although some tracks leave something to be desired because they where sourced from scratchy vinyl. The last three tracks are taken from the 1967 Granada TV-show 'New Faces' and fit in nicely with the rest of this compilation. Hope you like it.

About Do Not Adjust Your Set
Do Not Adjust Your Set took its name from the message which was displayed when there was a problem with transmission. Although the show was originally conceived as a children's programme, it quickly acquired a cult crossover following amongst many adults. The programme comprised a series of sketches, often bizarre and surreal, frequently satirical with a disjointed style which was to become more famous in the more daring Monty Python's Flying Circus, which followed five months later.

Many of it's actors and comedians later became famous, such as Denise Coffey and David Jason. Contributers Michael Palin, Terry Jones and Eric Idle became, together with John Cleese and Graham Chapman, part of the hugely successful Monty Python's Flying Circus.

The first series of 'Do Not Adjust Your Set' ran from January 4th until March 28th, 1968, with the fourth winning first prize at the Prix Jeunesse international TV festival. A new series was scheduled for the following February 1969. The second series would prove to be the last of this higly influental TV-series.

All my own rips, sorry no artwork.

Nice to have a Bonzos in FLAC.
thanks.
It would also be great to have the newly circulating Bonzos show @ Fillmore East 10/18/69 even the quality isn't very good.

every bit of bonzo helps. thank you. also goes for Vivian Stanshall.

Great musicians, I still listen to these guys more often than I should, my girlfriend just shakes her head at me and walks away.

Many thanks for this! You may not have seen this BBC Radio 2 documentary on the Bonzo Dogs from March 1997:

and, as usual, for all things Planet Gong and Here & Now (and a couple of Steve Hillages live in FLAC), check out our megapost here:

Good dispatch and this enter helped me alot in my college assignement. Gratefulness you on your information.