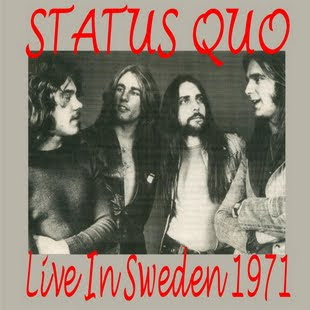 NOTES
This recording is one of the best early live Status Quo recordings, both quality and performance. The show was specially recorded for broadcast on Swedish Radio, a recording from the radio, usually in MP3, with DJ introduction at the beginning is quite common. This is not from the radio but taken from the Pre FM Soundboard, radio station master reels. An official CD release of this was going to be released back in the 1990’s but was cancelled by the band, they were not happy with the performance. I got as far as ordering a copy of this CD from a mail order company, only for a letter to drop through my door just after the release date stating “The Release Of This CD Has been Cancelled – It Is Highly Unlikely It will Be Released Any Time In The future.” Disappointment or what. Years later I found the MP3 then recently I found this, the real thing. I’ve made some artwork to go with this torrent as the only artwork I could find for this date was crap. This is vintage Quo at its best, even if the band themselves did not like it. Enjoy

If you have any website so please tell me its name.

this is really good cheers