Pink Fairies At The BBC 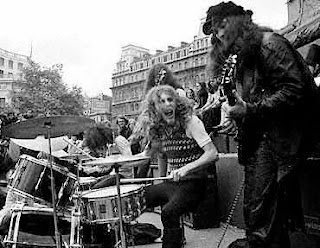 These performances were transferred from vinyl bootleg Uncle Harry on Italian label Get Back records issued in 1998. It also contained their performances of Do It and Uncle Harry from the Glastonbury Fayre however as they were officially released I had to drop them from this set. Besides these are all BBC recordings. The quality of the first two is slightly rough as if taken from an acetate but very listenable while the second two are a solid A- possibly from broadcast reels. The sound is extremely good and I have only applied the slightest tweaking to the volume levels and converted the recordings from analog to digital using DAT tape.

These are exceptionally good performances from one of the truly great arse rocking live bands of the early 70's who didn't outstay their welcome. To quote Twink in the sleeve notes:
Enter the Pink Fairies. Our mission was to revitalise the scene with cosmic rock and roll while simultaneously sticking it to 'the man'. Four post-hippy rock'n'roll Robin Hoods with a record deal. That was the dream. The dream is just beginning...
Unfortunately for me it was a nightmare trying to figure out whether these recordings could be upped here at all as the same tracks have been released on a CD called Mandies and Mescaline Round At Uncle Harry's on Burning Airlines Records in 2001.