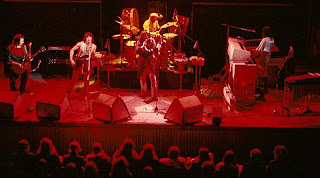 This is the first time that these recordings have been released. The original reels came from "A French Gentleman" who stumbled upon the various Magma blogs and who, as it turned out, had seen Magma several times in the 1970's. The gentleman not only had some assorted photographs, but had recorded various concerts. These tapes made their way to a well known DIME contributor who wishes to remain anonymous at this time. This person spent quite a bit of time digitizing the music and trying to clean up the sound. Some of these efforts were successful, some were not so ... as will be apparent in some later releases. I have dubbed these recordings "The French Gentlemen Tapes", and after about two years, I have been given permission to share these through time. Much thanks go to the Gentleman, as well as Trahnsferheur.

2-Gentle Giant
Playing the Foole: A Stake In The Heart

Note- The track "The Power and the Glory" was recorded in the studio,
and is not a part of the performance. This track was recorded 26 August 1974.

This fabulous set was recorded live in the studio with no audience. It was for broadcast in March on Los Angeles radio station KMET. Why this show has never been released is totally beyond me. The performance beats the commercially-available "Playing The Fool" by a mile. Although I haven't indicated it that way, I believe this to be a pre-fm recording. When you listen to the sample, you will understand why - the recording is amazing! This has to be the best recording and performance of "Funny Ways" that you will ever hear.

The following quotation is from Jack Skelly's great GG website, located at http://members.aol.com/JAskelly/GGpartfour.htm:

Feb. 13          In West Hollywood, California's Capitol Studios, Gentle Giant made a live studio recording, with no audience, meant for broadcast in March over KMET Radio in Los Angeles.  It included much of the material they were performing on stage during their early 1975 tour.  The group even recorded a brief musical jingle based on the radio station’s call letters, which, during the March broadcast, served as KMET’s station identification.  Interestingly, this jingle has been officially released on SCRAPING THE BARREL under the title With Gentle Giant on KMET.  The date of this live session is often listed as Jan. 1, but this date of Feb. 13 seems definitive.  At the time, they were in the area for the nearby Santa Monica gig listed below, held that same evening.  In fact, the Capitol Studios recording is often mistakenly listed as having been recorded in Santa Monica, as well.

The end of this release included the single version of "The Power And The Glory". It had to be removed.

I have heard the Wizardo version of this LP. This sounds MUCH better.

Does anyone have any more of this event from a certified pre-fm tape? Please post it!

Posted by Hal Jalikeakick at 6:47 AM

Thanks for these rare GG boots.

please note: 'Playing the Foole: A Stake In The Heart' and "Playing The Foole Capitol Studios" are the same recording source. The former is in fact the later. Notice how both have a studio version of "The Power & The Glory" tacked on at the end and that the set list is exactly the same for both. check it out.

The french broadcast is much appreciated having never heard (nor seen) it before. Cheers.

Thank you for the information , I wait for more information and I ask for a return visit our new website
>> Obat Pembesar penis <<