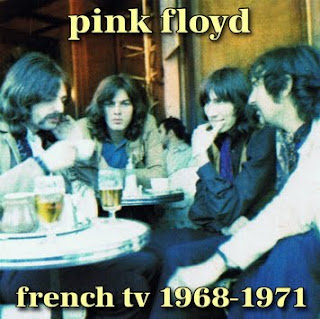 This *AUDIO* release compiles all the Pink Floyd live performances that were
filmed by French TV between 1968 and 1971, with the exception of the Saint
Tropez Festival of 08Aug70, available separately on TPR CD 005.

Some performances were done in ORTF TV studios (Bouton Rouge, Corrosion), while
the others were in front of an audience. All the tracks on this release were
played live, meaning that the Pink Floyd appearances at "Samedi & Compagnie"
and "Forum Musiques" TV shows, where the band was miming on the regular studio
versions, are not included here.

All tracks were carefully remastered from French TV archives, in order to present
this collection of songs in the best possible quality.
This is an upgrade compared to the audio tracks of the existing VoIOs such as
"French TV 1968-1969", "Ballets de Marseille" and "Pro-Shot In Europe 1969-1972".

Cuesheets are included for those who like to burn CDRs with all the required
text info.

Thank you, Hal . . . most enjoyable, and, an extra thank you for the FLAC.

Just found out Pink Floyd have pulled out of online distribution due to refusal to supply singles. Fair play really as its all about the albums but are they missing out on sales? Good story at this Music Blog http://bit.ly/8Xul5K