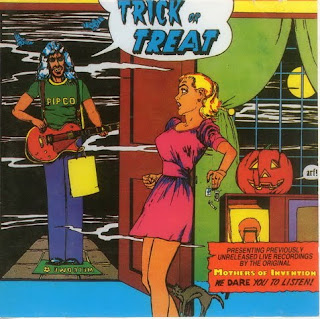 
Tracks 1-2 are live in London 1968. "Oh, in the Sky" is Roy Estrada singing a Ruben-esque tune. Track 2 has been officially released as tracks 16-20 of Ahead of Their Time, though there are some edits on the official album.

Tracks 7-8 are identified as live in Bremen 1968. They are listed as "Let's Make the Water Turn Black" and "Uncle Bernie's Farm" but do not actually represent these songs. Track 7 is the "String Quartet" (the instrumental medley of "Pound for a Brown" and "Sleeping in a Jar" with jamming), and track 8 is an "extremely slow instrumental". If they are indeed from Bremen, they are from the show that was televised in Germany as Lieder Liches.

thank you so much

This is surely a treat. Well done once more Great Hal. Even though I have all this shows I just need to say a very bigh Thank You very much again and again.

Frank Zappa is one of the greatest artists and composers of the last century. I still haven't got his whole collection, but you just helped me a little bit with my main goal!

Hi,the link is dead!
These fucking guys,who get satisfaction while deleting a link!
And there is no reason to do so...
v-c