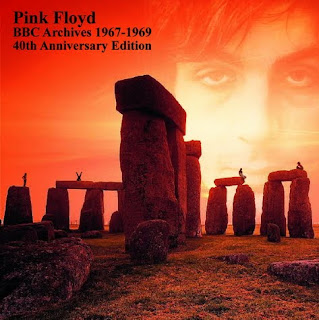 
40 years after the last Pink Floyd studio session for the BBC, Harvested is proud to present this upgraded version of "BBC Archives 1967-1969".

This release required a lot of work and took more than 6 months to complete. The purpose was to present each track in the best possible quality. The process was long because it was performed on a track by track basis. For each song, we had to compare many different sources in order to identify the strengths and weaknesses of each version and then decide which one(s) to work on. The mastering work was done very carefully, trying to repair every flaw that could be corrected... and there were a lot (tape warble, crackles, drop-outs, incorrect speed, etc).

Instead of giving all the details for each single track (we want to avoid sterile debates about lineage and sources), we prefer the results to speak for itself. We think people should judge by their ears; listen to your sonically-preferred versions and compare them to the ones on this new Harvested release. We can confidently say that every track is - sonically speaking - an upgrade compared to the best previously circulating version, including the master transfer of the 25Jun68 session (which offered complete versions but from a damaged mastertape) and the recent Celestial Voices tracks from the 12May69 session.

We made the choice not to include the various DJ intros in order to focus on the music. There are some exceptions such as Reaction In G and Set The Controls from the 25Sep67 session, but for the remainder the DJ comments were considered too distracting and so we edited them out (e.g. the Tomorrow's World tracks). Also, it's important to note that all tracks are presented in true mono, the way they were mixed by the BBC (there's no "fake stereo" nor "sound expanding" effect).

This collection not only includes the sessions for BBC radio, but also studio sessions for BBC TV shows and documentaries making it more complete than the previous releases. The number of tracks is now 30; 14 are covering the 1967 sessions with Syd (on CD 1) and 16 are dedicated to the 1968-1969 era with David (on CD 2).

Thanks for posting this! It appears that the second archive is corrupt. Can anyone confirm this?

It extracted fine for me when I made it!

All extracted fine for me.

Thanks for this, Hal. I had many of the tracks on other boots but these remastered ones are far superior in quality. A great find.

Thanks for checking Hal,

I finally found out what my problem was. The archive utility that I used has a particular way of handling split archives. It only works when you start with the first part. The utility that I had been using up until now would work no matter which part you started with.

This is an excellent compilation, thank you very much for posting it.

I meant to thank you as well bsk!

This was a labour of love so hats off to the people who spent so much time and effort in making this a really enjoyable listening experience. And of course thanks to you for posting this!

.., wow.. this is really fun to read... this is also interesting as this give detail more and more about the band...
Sabbath

Thanks. Great upgrade to previous versions.

Will this ever be officially relesed?

More than 30 years for Bob Dylan's Blues... think about it!

Thank you for posting this. Do you have Dark Side of the Moo?

wicked, nice one. looking forward to this...

Great Job! Keep Up the good work!
Curiously should track 3 on Disc 2 be "Murderistic Woman" instead of "Murderotic Woman" ?

Great Job! Keep Up the good work!
Curiously should track 3 on Disc 2 be "Murderistic Woman" instead of "Murderotic Woman" ?

I love you man!

thank you very much!!

Pink Floyd is the most perfect band I've hear in my life because their sounds are terrific, they don't use electronic instruments that's the best part of this perfect band I love them.m10m

These links don't seem to work. Can you repost?

Yeah - share-bee has been down for weeks, any chance of a re-up? I'd love to hear this one.
Top blog by the way
cheers
Bob

Never Mind, Share-bee is back up
Cheers for this
Bob

Thanks...PF only really made 1 LP!

Thanks for the archives but at least for me both parts appear to be corrupt. Also, I could only download them from DepositFile.

Could you please re-upload the files? Or maybe e-mail me the songs: Let there be more light and Embryo, which are the ones that don't work for me! Thanks again.

Very thanks by the contribution.
Great material to listen.

Thanks for this, especially the Syd stuff


Good write-up. I definitely love this site. Keep it up


Everything is very open with a precise explanation of the issues. It was definitely informative.